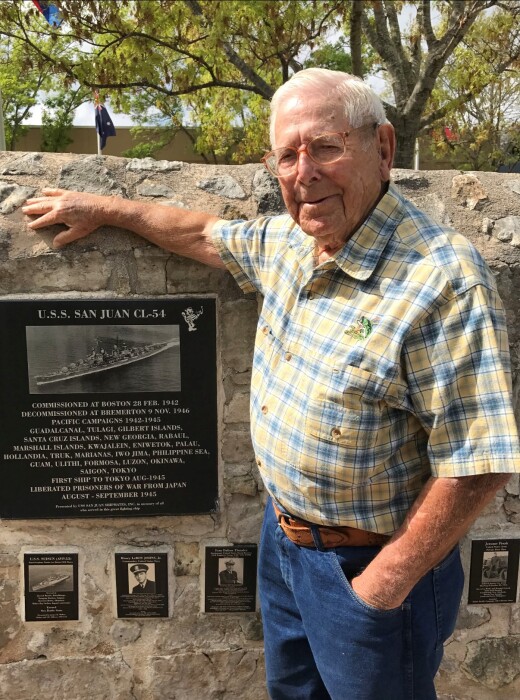 Joseph Marshall Dubray (Joe) passed away on August 5, 2021, at BAMC Hospital in San Antonio after a short illness. Joe was born March 13, 1925, in Austin, TX to Joseph M. Dubray, Sr. and Agnes Nester Dubray. One of 4 children, Joe had lost both of his parents by the age of 5. He was then raised by his aunt and uncle in D’Hanis, where he lived until he graduated & joined the Navy in 1943.

Joe was assigned to the USS San Juan, serving as a radioman during WWII. He loved his country and was very proud of being a WWII Survivor. He was fortunate to be on one of the Honor Flight trips to Washington D.C. a few years ago, accompanied by his good friend Charlie Koch.

In 1949 he married Wanda Van Fleet and they had 3 children together. Joe served in both the Navy and the Air Force, retiring in Colorado Springs in 1968. He then worked under Civil Service as a computer expert until 1980. He and Wanda had moved back to Texas and enjoyed many happy years living in Yancey. Here, he began his next venture, a Pecan Orchard. He became very knowledgeable in the grafting of pecan and fruit trees, helping anybody who needed his expertise. If he wasn’t in his garden or orchard he could usually be found on a creek or pond with a fishing pole in his hand. In his later years he was at his happiest spending time on his old home place with Larry and Linda Klekar reminiscing and fishing on the Seco Creek. Staying active and his positive outlook on life kept him happy and healthy well into his 90’s. He loved to laugh, loved people and always had a story to tell.

Special thanks to the doctors and nurses at BAMC for such care and compassion.

A graveside service will be held at Hondo Cemetery on September 25, 2021, at 11:00 am. In lieu of flowers, donations may be made to St. Jude Children’s Hospital.

To order memorial trees or send flowers to the family in memory of Joseph M. Dubray, please visit our flower store.