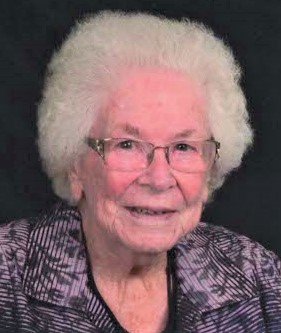 Gladys grew up as an only child on her family’ farm in Vandenburg. She Frequented Qhihi Dance Hall where she learned to dance and et a guy named Harvey. After Harvey served in the Army in WWII, they were married and lived in Rio Medina. Shortly after, they made their home in Vandenburg and raised 4 children.

Gladys had a strong faith and was an active member of St. John’s Catholic Church. She served on St. John’s Altar Society and on the bereavement committee.

She spent many years growing her own food, babysitting grandkids, and crocheting beautiful things. She was blessed to have lived her entire life at home on the family farm.

Gladys is preceded in death by her Husband: Harvey Alvin Stein; her Son: Lyle Thomas Stein.

Memorials may be made to St. John’s Catholic Church.

To order memorial trees or send flowers to the family in memory of Gladys Marie Stein, please visit our flower store.